How Do You Choose a Front-end Framework?

A front-end framework is a structure to put in place to help you engineer an efficient and yet useful front-end for your web application, website, or software. The general idea is to have a structure to align your files, configure your components, make seamless data association with DOM elements, and so on.

Angular and Vue are considered to be two of the most popular front-end frameworks. Used by developers and teams of all scales and sizes, both have their use-cases and drawbacks.

Google created angular in 2010 as a JavaScript framework based on TypeScript. A significant change in the framework came in 2016 when Angular's second iteration was released. The last major update was launched in February 2020 with Angular 9.

Initially, when Google started working on Angular, it looked for a tool to manage large-scale projects. Between several dozen teams, millions of lines of codes, and a tremendous amount of code-sharing, Google saw a clear need for a framework to streamline everything. Hence, Angular was created.

In 2014, Vue's creator Evan You had a similar epiphany. He was inspired by AngularJS but was not interested in the extra features and functionalities he wanted with a light-weight front-end framework. To fill that gap, he created Vue. Vue is relatively new, growing at a considerable pace of adoption.

In 2018, Stack Overflow conducted its annual survey among programmers to locate the most popular tools and frameworks. Interestingly, Angular emerged as one of the top agencies, with 30% of programmers saying they were regularly using it. The same number stood at 15% for Vue.

Angular vs. Vue : A Comparison 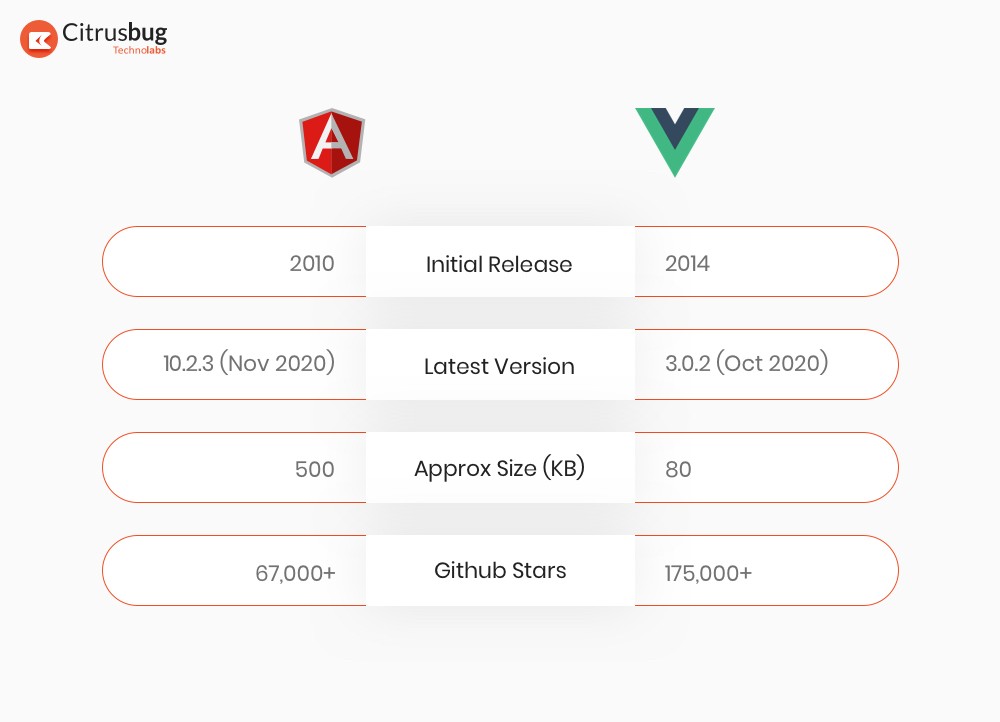 When programmers are asked to choose between two platforms or frameworks, they tend to prefer to have a good experience. Hence, to perform a more objective assessment, here are few metrics on which you can analyze both the frameworks. Choose the one that suits your purpose:

Syntax measures how lucidly easy it is to define functions and variables, the length of code necessary to perform a specific task, and the inbuilt libraries. Having a syntactically easy to use framework can help you expedite your projects and control costs.

Angular necessitates a good understanding of Object-Oriented-Programming along with fluency in TypeScript.

For most developers, Vue has an easier syntax. It was designed to be a light-weight framework for prototyping and quick deployment. So, unless you are making a heavier web application with several features, functionalities, and analytics, Vue would be easier to use.

When you start scaling your project, you will find that several elements and features are not already available in your framework. In such instances, how easily does your framework integrate with third-party libraries and elements?

In these regards, both Angular and Vue offer easy integrations. Angular is especially accommodative to JavaScript libraries. Vue also has a large range of libraries it easily integrates with. So, both of them are more or less the same on this metric.

The flexibility of your project's structure will help you pivot easily or take unconventional routes to add, remove, or modify elements for meeting your end-goal. More flexible project structures help in making changes rapidly.

Angular has a set of opinionated rules that you have to adhere to, as far as the project structure is concerned. However, the Angular community supports many add-ons and other technologies that can circumvent these overall project structures. So, Angular can give you the freedom to choose between a conventionally structured approach and a relatively adaptive one.

Vue has a smaller set of libraries and a relatively more cemented structure. Hence, some developers might find it a little restrictive.

Between these two, Angular has a more flexible structure.

Scalability is simply a measure of how efficiently you can scale your app without losing on the performance. Angular was engineered for scale. Its asynchronous environment and modular programming make it the ideal front-end framework if you are putting scalability on a high preference.

Vue is dependent on templatized syntax. Such syntax can help you quickly program new iterations, but when the base application grows in scale, it becomes difficult to reuse the same code.

In terms of scalability, Angular is far ahead of Vue.

Loading time is quite self-explanatory. But, it has deeper impacts on the economics of your project. If the web application or website is lagging initially, the user experience will not be negatively tinted and result in lesser traction in the longer run.

Angular was designed for larger use-cases and projects. Hence, by design, its loading time has been notably higher than Vue. With the advent of alternatives like Ahead-of-Time Application, Angular is slowly decreasing the gap with Vue.

Vue was engineered for efficiency, and that clearly shows up in the application's loading time. Hence, for this metric, Vue is the preferable choice.

Tech giants extensively use both frameworks. Angular is popularly used in Gmail, Forbes, Upwork, PayPal, and several other companies. Vue is used at Facebook, Adobe, and Grammarly along with other major platforms. 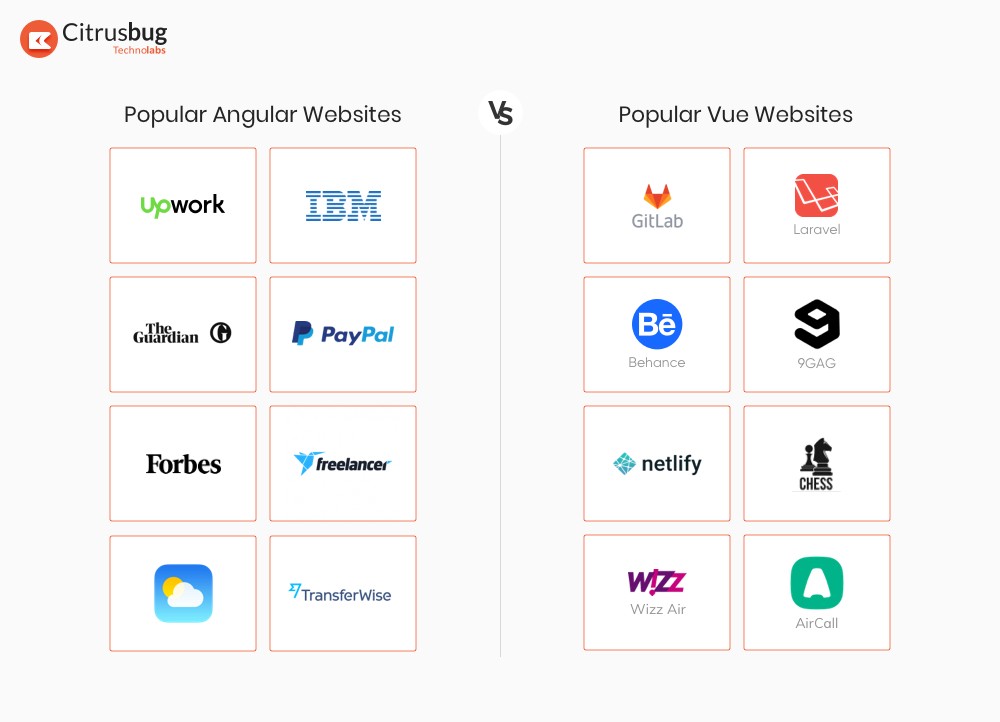 If you plan on building a large platform with near real-time access and updates to content, Angular would be the preferable option for you. Vue is ideal for single-page applications where you want quick development and deployment.

So – which framework is the winner of this study? There is ample Angular human capital available in the market. Given that it is scalable, provides more leeway with the overall project structure, and is used by several tech giants, Angular might seem like the real winner. However, Vue is being adopted across the value-chain as rapid deployment has become a competitive edge. Both the communities supporting these frameworks are growing and will continue to do so for the time being. Ideally, as far as you have a great technology development partner on-board who is having expertise in Angular as well as Vue and a clear use-case defined before the project goes into development, you will get significant value irrespective of which framework you choose.

React vs Angular in 2021: Which Framework to choose for Frontend Development