The increasing popularity of web and mobile applications has led businesses to look for a better way to develop web and mobile apps with quicker speed and less resources. Angular is a javascript framework that has been introduced to decouple the logic of the application from DOM manipulation.

It was widely referred to as the "Superheroic JavaScript MVW System" for the strong features it offers. These features make it easy for developers to build some rich single-page applications. It has easy tools to use that function seamlessly together in tandem, making the development process much more effective. In fact, a study shows that there are around 968,934 live websites using AngularJS and an additional 2,809,114 sites that used Angular JS historically.

It is therefore evident that any Angular Development Company prefers this framework to others for its front-end development. This further helps the Angular community to sustain and update versions with each progressing day.

In this article, we compare the Angular 9 vs 10, the characteristics and by-products of this system. That being said, let's start by understanding the benefits of Angular and why businesses choose this framework. 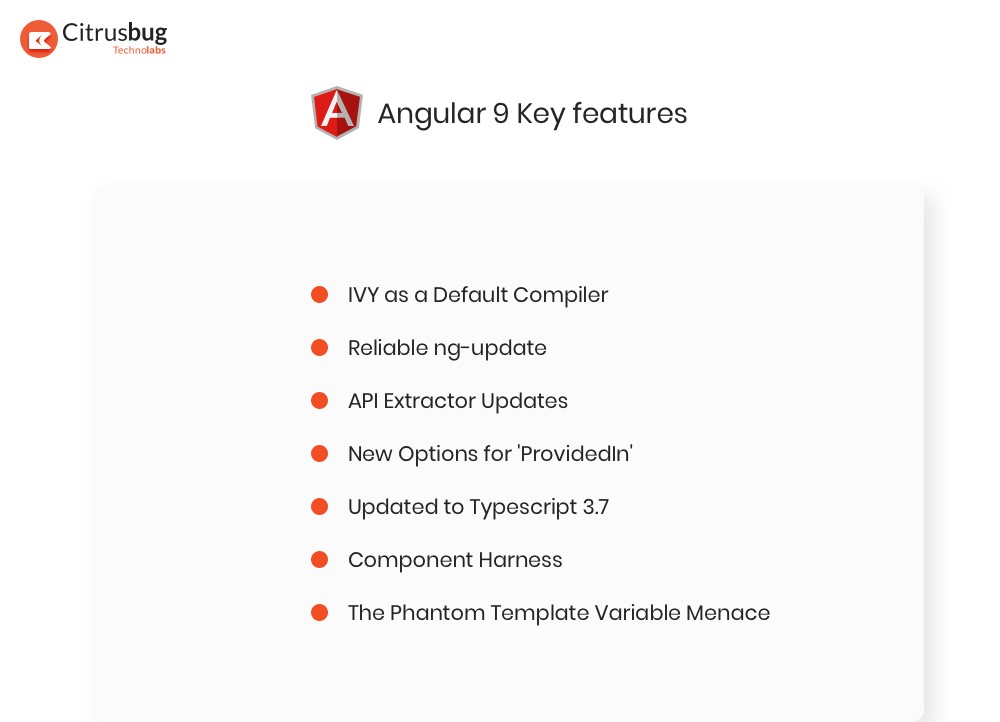 Angular 9 was founded in February, which has revolutionised the methodology of every other mobile app development business. The last development had made everyone hopeful that a new paradigm would begin.

The month of June witnessed the launch of Angular 9.1, and everyone knew that the next iteration might be around the corner. Version 9.1 was mainly a test version of Angular 9 and came with improvisations and updates. Nevertheless, version 9 offers a long set of features.

IVY as a Default Compiler

The standard IVY compiler helps to work better because it decreases the package size by 25-40 percent. Decreasing file sizes also allows developers to build user-friendly applications. IVY tests the bindings within the layouts of any application and then reports any problems it may encounter.

This helps to find some of the bugs prior to the production process. It assembles the codebases at that point with a range of techniques and approaches for troubleshooting its applications. In Angular 9, the IVY works with the binding style without being subjected to any timing. Angular 9 retains the vast majority of vulnerabilities without having to sacrifice its performance.

The ng update is an important update of the new CLI framework that activates the existing updates automatically. This helps to provide updates and information on every form of migration.

Angular depends on a number of programmes and administrations that are hard to navigate. In Angular 9 the API framework of these various services and libraries makes it easy to find missing updates with the intention of delivering them without any problems.

In this angular 9 characteristic, we get some options while designing services in Angular. for e. g

The providedIn: 'platform' that gives the service available in a unique single platform, is distributed by all applications on the page

IDE and Language Service Improvements: It supports to give a unique case in each module, giving the token

Angular Language Support Extension introduces a significant range of helpful increases for requests to improve Angular's growth involvement. Extensions include Angular bits, ESLint, and an improvement in troubleshooting. In addition, these efficiency and security problems have been resolved.

Typescript 3.7 was published in November 2019 and had a major effect on Angular 9. Angular 9 is updated to function with features such as Nullish solidification and optional Typescript 3.7 chaining. This factor helps to keep the environment in sync.

Angular 9 offers elective methods to test elements to assure that the unit tests are analyzed specifically and are less vulnerable. Angular seeks the components on its own. In angular 9 the compilation and runtime have been collated and refreshed, and thus it is no longer appropriate to differentiate this from the entryComponents display.

Earlier, the phantom variables were not listed in the template's linked section. Building on these appearance considerations can usually weaken applications. With angular 9, a compiler error occurs when a template variable is created that has not been defined in a component. 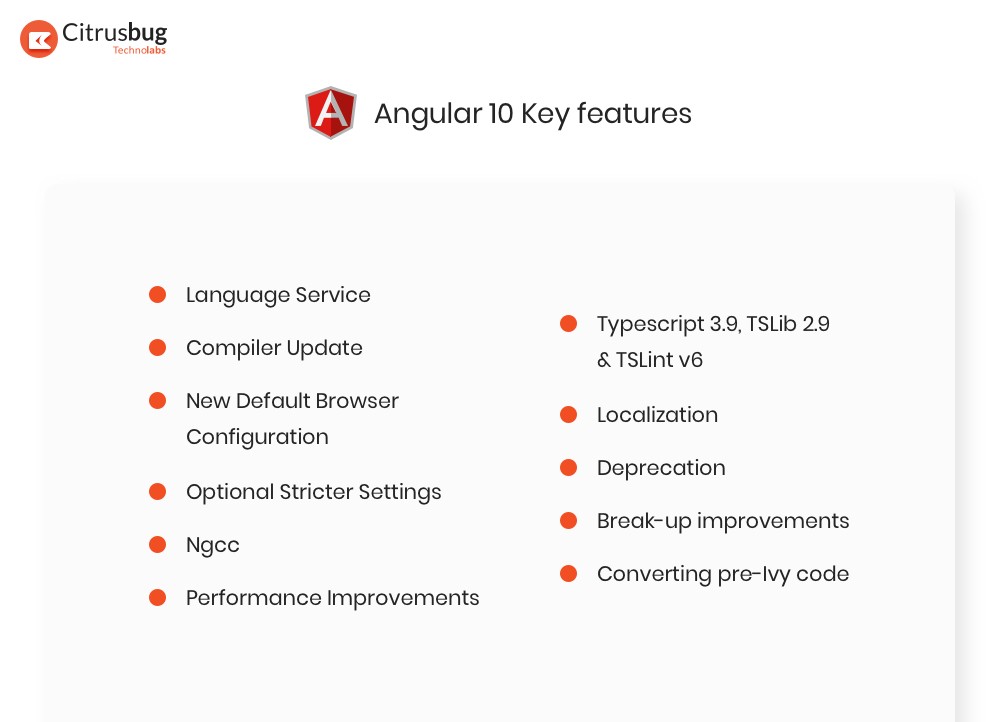 In the contrast of angular 10 vs angular 9, angular 10 is the smallest, since it focuses primarily on environment and consistency resources rather than introducing new components. Let's just take a look at them.

The language-service-specific compiler offers several type-check files all in the name of safeguarding the central in-house features of Angular LS with dubious merit and performance costs.

In angular 10, the compiler interface is applied to the real ntsc compiler. Constraint information, Angular Language Support, ng-content selectors are further an addition to metadata, promulgating the exact cost period in the ExpressionBinding of the micro syntax language.

The browser setup for all new ventures would reveal an updated version beyond the old ones, with the side effect of removing ES5 builds for new ventures by default.

Angular version 10 offers a stricter configuration of the project to build a new environment with ng new. When this flag "ng new—strict" is allowed, the new project will begin with new settings that will support maintainability and continue to capture bugs well ahead of the development phase.

With the introduction of the A Software-based Entry-Point Finder in angular 10, the Entry-Point Finder could only be reached by a programme that is specified in the tsconfig.json file. This choice catalyses the operation at locations that are built with a comparatively limited number of entry points integrated into that programme. This will manifest and reduce the file size of the access point.

With angular 10, an increase in efficiency can be seen as the scale of the entry points has been minimised. Caching the specifications and computing the basePaths further helps to boost performance.

This is several of the big highlights of Angular 9 vs 10. In comparison to the older version of Typescript 3.7, Angular 10 was updated to Typescript 3.9, where the team focused on performance, quality and stability.

Error-checking, consistency, fast fixing, speeding up compilation and editing experience are a few of the services that Typescript 3.9 provides. Angular 10 has now been modified to work with TSLib 2.9 & TSLint v6.

Angular 10 facilitates the combining of several translation documents using a message ID that was previously made for a single file in angular 9.

Angular 10 neglects the Differ headers as the Utility Worker cache sources are retrieved when their headers are not identical. In the event that any programme wants to separate any response, it is very important to ensure that the Angular ServiceWorker is configured in order to prevent caching the associated resources.

Angular 10 has seen some deprecations, such as typescript 3.6 and 3.7, the addition of ESM5 or FESM5 packages, as well as the disparagement of older browsers, involving IE 9, 10, and Internet Explorer Mobile. The disparagement of the ESM5 or FESM5 bundles allows you to save 119MB of download and instal time while yarn or npm is running for Angular packages and libraries.

There are a few break-up improvements in angular 10 that impact the whole ecosystem.

Logic is modified to fit the time within a day span lasting past midnight. This can affect programmes that use either formatDate() or DatePipe or b and B format codes.

Any approach that returns to empty would cancel the navigation. To turn this on, developers need to update the resolves to adjust the value as default! Empty. Empty.

In angular 10, the NPM does not include any constructive jsdoc statements to help in the enhanced optimization of the closure parser. Closure Compiler would use higher off-absorption designed Angular applications that are specifically sourced rather than consuming variants on NPM.

The solution for this is that users can't overlook how to use the current construct pipeline with the Closure flag—compilation level=SIMPLE.

Both alerts are logged in as bugs without destroying the app. Standard is made compulsory in Angular 10 for ModuleWithProviders to work with both Ivy compilation and pipeline rendering, meaning that no create mistake is made while a developer uses View Engine.

Pre-emptive dependencies are to be converted into ivy dependencies. This would take effect as a guide to running ntsc at the programme stage. All potential compilations, as well as binding operations, need to be rendered in order to convert the versions of the dependencies.

In the analysis of Angular 9 vs 10, we can see their differences in upgradation and deprecation. However if examined as a full framework, it is as strong as any other framework built on javascript in the world. According to the 2018 State of Developer Ecosystem Survey, regular usage seems to overlap with popularity for the most part, with AngularJS taking one of the top positions.

The angular team is working on releasing two versions per year. If you’re looking for Angular web development services of consultation, contact our experts at Citrusbug today!