Flutter vs NativeScript: Everything You Need to Know

Flutter and NativeScript are the two most popular frameworks in today's era. These frameworks help build apps faster, easier to code, enhance performance and increase the number of users the app can reach. Also using these frameworks save a lot of money by reducing the time spent on building the app. All this may seem to be very beneficial but choosing between Flutter and NativeScript can be really very confusing. This blog is to save you from such a dilemma.

Flutter is an open-source UI development toolkit for creating beautiful applications for web, desktop, and mobile app development from a single codebase. It works with currently existing code, it is used by developers and organizations around the globe, and it's completely free. It helps you to take control of your codebase with developer tooling, automated testing, and everything required to build high-quality applications. So now you have got a basic idea about Flutter it's time to discuss the pros and cons of Flutter.

Some of the major advantages of using Flutter are:

Some of the drawbacks of Flutter app development are

NativeScript is an open-source framework used for mobile app development for Android and Apple iOS. It was originally developed by Progress. It allows you to build mobile and web apps through a single codebase. It was released in 2014 and it quickly gained popularity globally for its platform-specific capabilities and ease of use. Before we move on to read about the comparison between Flutter and NativeScript let's discuss the pros and cons of using NativeScript.

Let's have a look at some of the key advantages of NativeScript:

Some of the cons of using NativeScript are:

Comparison between Flutter and NativeScript 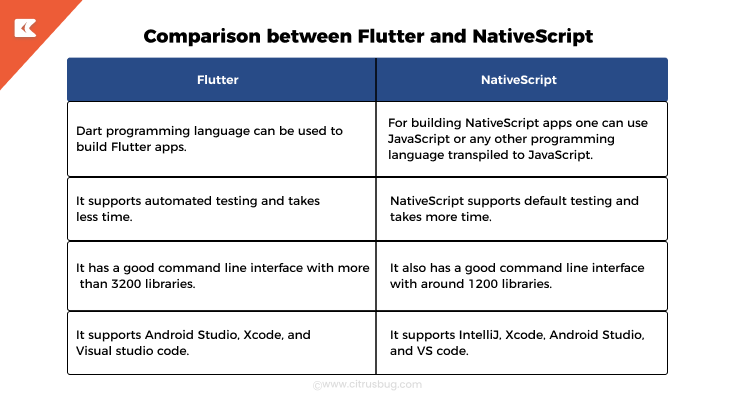 In terms of speed, debugging and deployment Flutter app development is really fast as compared to others.

NativeScript was developed by Progress.

Some of the major advantages of choosing Citrusbug Technolabs for mobile app development are:

Hire Mobile App Development Developers as per your need :

How Much Does It Cost to Build a Blockchain App in 2022?

10 Reasons to Use React Native for Mobile App Development