Today, Artificial Intelligence (AI) has become a mainstream phenomenon and has an impact on every industry ranging from retail to banking and consumer electronics. From intelligent assistants on smartphones such as Siri and Google Now to a smart speaker and device embedded virtual assistants like Alexa, we can easily say that every person interacts with some form of AI on a daily basis.

From a business perspective, research firm Gartner estimates that nearly 37 % of all organizations have implemented some form of AI in their business operations. While a good majority of these implementations have gone into consumer-facing avenues, AI is also a highly efficient tool for several businesses to spruce up their internal efficiency and productivity. A good example of one such industry is none other than the software industry.

Studies show that globally, the market for custom software development services will hit a staggering 61 Billion US Dollars by 2023 from the 47 Billion it was in 2018. And one of the key drivers of this growth will undoubtedly be autonomous software development paradigms that are facilitated by artificial intelligence. We are not talking just about coding without programmers here but a more holistic approach on building software with machine learning and big data analytics. We shall go into the details further in this blog.

Credited with building the foundation of AI in almost every business environment, the software sector has witnessed massive efforts recently to use AI in improving their own services. AI in software development is a hot and trending topic among the C-Suite of today’s large as well as small technology companies.

Any form of software development involves coding and for developers, the biggest impact that AI can bring in their daily routine is by helping them to code better and faster. So how can AI achieve this?

If we take a closer look at how much time each activity that a developer undertakes daily, it can be clearly seen that a good majority of this time is spent on surfing through the documentation on project specifics and debugging code that is created. Intelligent assistants that support programmers can bring a plethora of changes in this regard and make lives easier for developers.

Using high-end AI assistants, it is possible for developers to get access to real-time recommendations on code specific documents, best practices as well as examples of code that can fit particular use-cases perfectly. Kite, Codota are some well-known examples in this regard which makes work easier for developers focusing on Python and Java respectively.

In fact, startup companies in the AI-assisted programming sector have raised over 704 million USD in 2019 alone which shows the huge potential this has in reshaping the software sector in the coming years.

One of the major reasons for delayed project kick-offs and contract signing in the IT sector is the inability of service providers to offer a demonstration of the proposed solution in time to convince clients of their potential. The prototype they build to support their claims may have delayed implementation time and can possibly lead to loss of customer interest due to excessive delays.

There needs to be a mechanism for smart and faster prototyping of solutions or in other words, a minimum viable product or solution needs to be demonstrated at the earliest.

This is an area where artificial intelligence can step in to make a considerable impact. Smart AI tools can help solution architects map business functionality into technical prototypes in a matter of minutes or hours when compared to the weeks or months it takes for a manual process. Machine learning enables the easy creation of smart demonstrations by associates who have even less technical experience.

It empowers the creation of actual visual representations of technology solutions having fully functional user interface components and output generation capabilities. This will help shorten sales cycles and also create a crucial reference element for the development team when they set out to create the actual product after the client is convinced with the prototype demonstration.

Writing code is no easy job and just as with any manual activity it is never free from erroneous circumstances as well. And everybody knows what happens when critical errors creep into blocks of code and go undetected and enter deployment. While developers do a routine job of reviewing their own code regularly, chances of them skipping errors are high.

This is where AI can be a game-changer. Intelligent AI bots can be programmed to study the erroneous behavior of programmers and infer insights into how potential errors are produced in code blocks. It can then classify common errors into a pool and highly unexpected ones into another.

Once this is done, these AI bots can review and capture erroneous behavior in code blocks faster and more efficiently than human coders. They can analyze system logs, check with pre-defined syntax or documented code guides to flag errors before they are sent for next stage compilation or quality assurance phases.

Moving forward, the industry expects AI enabled error handling systems to identify, trace the root and rewrite erroneous code or code blocks without human intervention. While this can sound a bit scary it is a possible scenario and a very beneficial element for software developers to churn out risk-free code.

The one area where artificial intelligence can make the biggest impact when it comes to the software development lifecycle is the testing phase or more popularly known as the Quality Assurance phase. Even today, several large enterprise application development projects utilize a plethora of test automation tools like Selenium to create automated testing environments for their developed code.

AI in testing opens a new dimension in this regard. From analyzing code for errors and bug fixes to ensuring sanity checks on all running environments, AI-enabled software testing platforms can help IT service companies leverage human resources for more important tasks rather than engaging them for routine jobs such as script creation for testing.

AI enabled tools can transform testing into a self-sustaining exercise in the software lifecycle and eliminate erroneous or biased decision making with regards to quality assurance.

This helps in preventing maximum number of errors or bugs, as they are fondly called in the software development world, from creeping into the final code ready for deployment. Though making autonomous makes the entire software delivery process faster, it is advisable to have human monitoring of the activity to ensure that there aren’t any technical glitches that may lead to unscripted test scenarios from popping up.

The key reason why clients often face dissatisfying experiences with IT service providers is due to wrong budgeting and project delivery scheduling. This happens because a lot of estimations and effort calculation processes are driven by manual workflows.

There is also a lack of a definitive process where feedback from previous estimation and budgeting activities are used as lessons learned to avoid repeated mistakes. This calls for an intelligent overhaul of the budgeting and scheduling process as a whole.

Artificial Intelligence can be the key difference in this context by making the entire project scheduling and budgeting activity a well informed and autonomous process. A reliable project estimation activity requires a deep understanding of the project scope, context, client deliverables, performance metrics of the IT service provider’s resources and other rudimentary factors.

By using powerful AI enabled platforms, there is a huge opportunity to predict estimates more accurately and avoid negative and dissatisfactory experiences for clients. Machine learning can be used to understand implementation scope from RFP’s and also be used to study previous project artifacts to understand how similar user story estimates were mapped to actuals.

These AI tools would then allow project managers to predict accurate figures for schedules and budgeting thereby creating a win-win situation for all stakeholders. 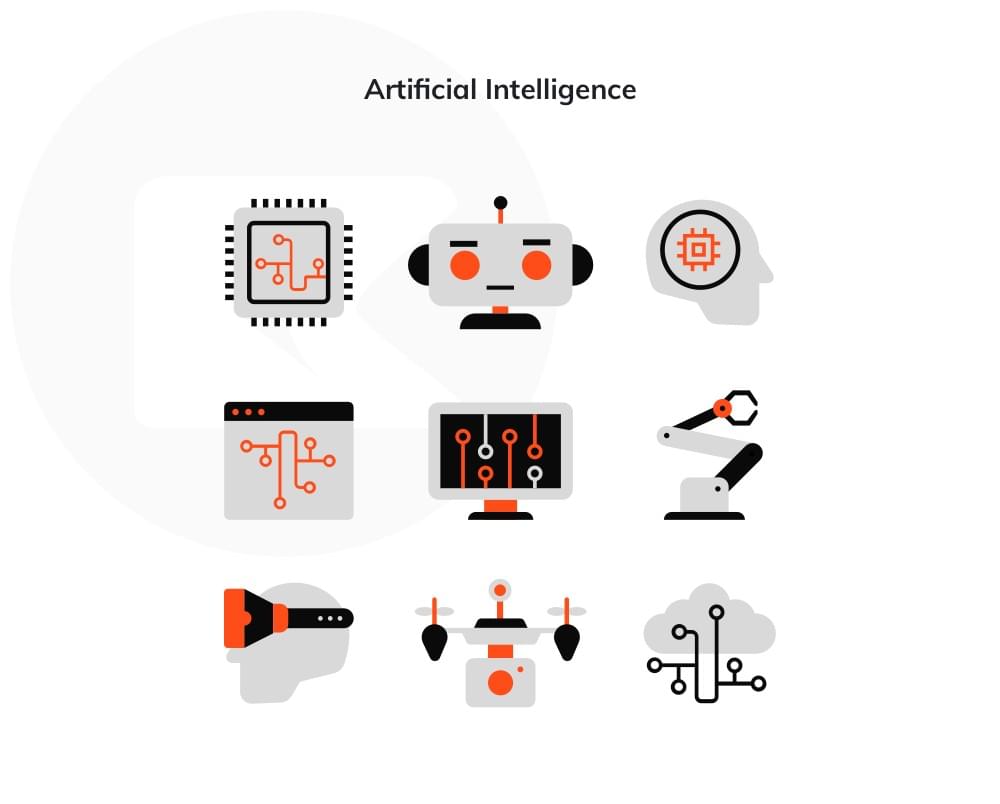 Artificial Intelligence is definitely turning into a focal tool for both business leaders and engineering teams to make strategic decisions on software development. From coding to testing and prototyping, the areas where AI can make contributions are widespread. The ones who invest wisely to on-board the best tools and follow best practices while utilizing the tools will gain a significant advantage over the competition. The digital transformation drive that businesses across the globe are pursuing will require software service delivery to be faster and risk-free.

AI in software development is a key pillar that every IT organization needs to build to help their customers move in this direction. AI should not be seen as a threat to human resources who currently build most of the software we see around us. It is to be viewed as an intelligent enabler that empowers human programmers and developers to build better applications that satisfy client expectations every single time.

Hire AI & ML Developers as per your need :