Do you know Instagram, Uber, Dropbox, Amazon, and Netflix are created using Python? Python has become the number one choice for developing profitable business applications. Find out why Python is dominating the sphere of digital apps. Also, understand the step-by-step procedure to hire the best Python developers for your project idea.

As the technology is advancing and revolutionizing various sectors to become digital, the demand for Python programming is expeditiously surging. A large number of enterprises are choosing Python to develop their applications, either for business or to carry out their workflows. Whatever may be the case, Python is booming, and so is the demand to hire Python programmers.

Why Is Python Programming Still Ruling the Digital Markets?

The first version of Python was released in 1991, and ever since, numerous new languages have been inducted into the world of programming. But why is it that a large number of corporations still rely upon Python for their development needs?

Well, Python is a preferred choice for various enterprises because of the following reasons:

One of the reasons for the soaring demand for Python is its enormous capacity to create applications for all leading technologies. Whether it is AI(Artificial Intelligence), ML(Machine Learning), Gaming, Web or Mobile App Development, Python can create easy logic and programs for all.

The source code quality of the program determines the efficiency of the software. And when it comes to Python, there is no other language that is better equipped to create programs with less time and effort.

Python uses simple and readable syntax to write down its code. Apart from it, Python also leverages reusable code that speeds up the development time by reducing the efforts of the programmers.

Here is an example of Python and Java code written for converting kilometers into miles. 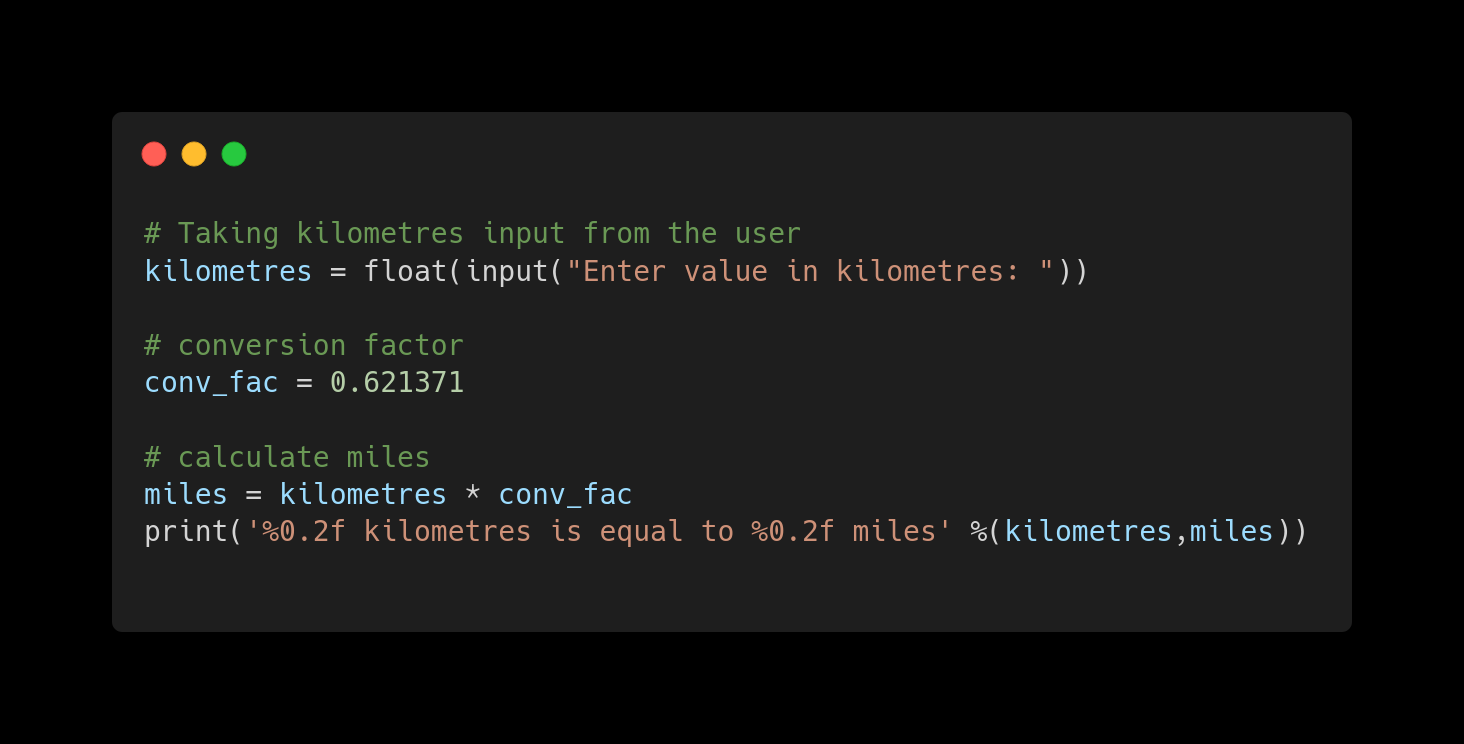 Here is an example of Python and Java code written for converting kilometers into miles. 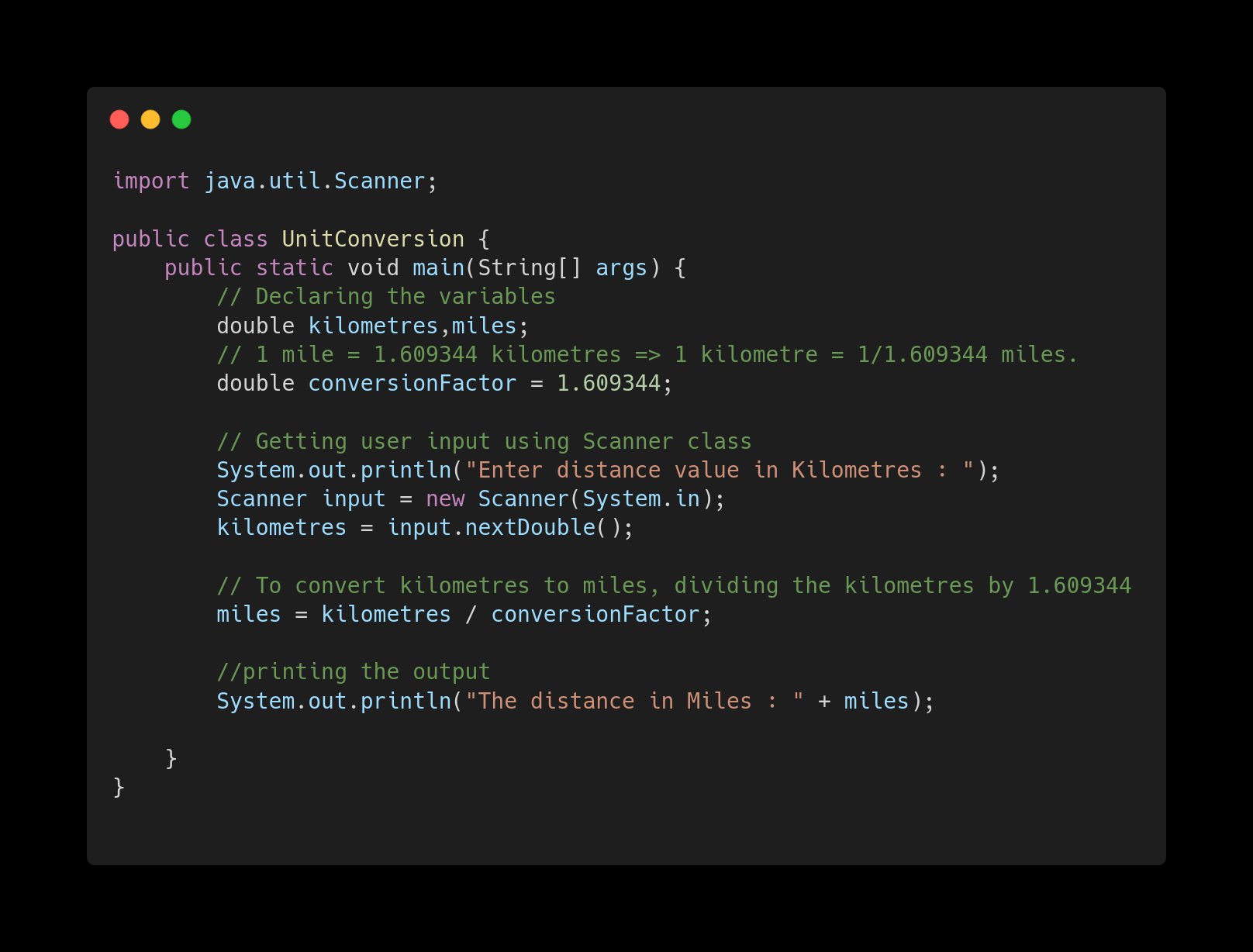 Developing cross-compatible apps that can run on all leading platforms is the need for today’s digital industry. Python is a tremendous language that lets you run modified application code for various programs without recompilation of the code. This enables different industries to migrate their code to Python and develop apps that can be used on various platforms.

Today, the competition is as high as it can be for all businesses, and each day new and innovative applications are being introduced in the market. That is why entrepreneurs want a quick process for developing their apps.

Python, being an interpreted language that uses concepts of reusability and easy readability, ensures the fastest time to market for your product.

Another reason for the high prominence of Python is its easy learning curve. Unlike other programming languages that may require considerable time for learning, Python is easy to learn and understand. That is why many first-time programmers choose Python as their first language to learn and build programs.

Searching for developers to build your project idea?

Python vs. Other Programming Languages

Python is a developer's favorite language not like that but because of its top-notch features. Some of the key reasons that set Python apart from other languages are as follows:

Python is a complete language by itself and can develop apps from scratch to ultimate using its functions and methodologies. Hence, it is always recommended for the creation of complex software applications.

The open and large Python community keep updating the language with new methods and techniques, easing the work of other developers to create high-performing applications.

Python is known to provide out-of-box solutions and has the capability to handle both the frontend and backend of an application effortlessly.

3rd party integrations have become a must for all successful applications. With Python, developers can flawlessly integrate different tools and methods into their fundamental program.

Below is a comparison table for Python and Java, which are both considered the most used languages in today's time.

Explore in Detail Why Choose Python Over Other Programming Languages?

What is the Required Skill Set for a Proficient Python Developer?

If you wish to hire Python programmers for your project, it is crucial to hire experienced and skilled developers that can provide the best outcomes for your project idea. Here are a few things that are a must for proficient Python developers:

The fundamental necessity for a Python programmer is to thoroughly understand core Python concepts such as data structure, file handling, iterators, and OOPs concepts.

2. Hold over Python Frameworks and Libraries

This is one of the most leveraged skills of a Python developer. Most businesses hire Python programmers to build their mobile and web apps. Therefore, the developer that you choose must be skilled in various Python frameworks and libraries such as Django, Flask, CherryPy, Web2Py, etc.

ORM is immensely crucial to handle incompatible type systems within object-oriented programming. That is why make sure to hire a Python developer that is an expert in managing ORM issues.

Machine learning and artificial intelligence are the most advanced technologies whose programs can be written in Python. So if your project is based on these data science technologies, ensure your Python programmer is well-versed with the technologies to attain the best results.

Where to Hire Python Developers? 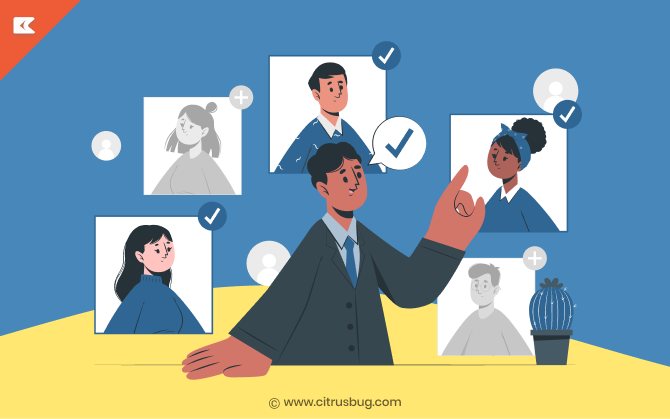 It is vital to choose developers with expertise and experience in developing software in Python for the success of your project idea. You can get Python developers from two sources:

There are countless websites from where you can hire Python programmers to develop your project. Hiring from a freelancing website is a much cheaper alternative than hiring from a development company. However, the risks involved are higher in this route.

Another substantial and more preferred route by businesses and entrepreneurs is hiring Python developers from a reputable Python development company. It is a safe option to opt for, as in this option, the chances of the failure of your project are minimal.

How Much does it Cost to Hire Python Developers?

Now that you know the two sources from which you can hire Python programmers, let us look at the costs of hiring them. Python developers are spread worldwide and charge according to their expertise, experience, and region where they are based.

Here is a table that depicts the costs of Python programmers in different regions of the world:

Looking for Experienced Python Developers at a Reasonable Price?

How to Identify a Reliable and Experienced Python Developer for Your Project?

The primary step in the search for your Python programmers is first to identify your project needs. Be certain of your project idea and research the features and functionalities you wish to achieve in your application.

Note down all the information related to your project on a paper so that you can freely discuss it with the Python developers.

Once you have listed down your requirements, thoroughly research and find suitable contenders for your search for Python programmers. You can analyze the portfolio of the developers mentioned on their website, which will showcase their level of experience and expertise to develop Python projects.

Shortlist three to four good Python development companies that you find suitable for your project needs.

Technical Screening of the Developer

The Python developer that you hire must be well-acquainted with all the leading technologies that will come into use while building your project. Hence, to find out the expertise of the programmers, create an online test including MCQs, MAQs, coding simulations, etc. that will determine their skills on

You may find Python tests online too on websites such as testdome.com, test4geeks.com, etc.

Discussion of the Project Idea: Budget and Time Constraints

Once you are over with the screening process and finalized the best Python development company for your project, you can set a meeting with their project manager.

In the meeting, your project will be discussed alongside the technical and budgetary requirements for the project. Also, a time structure would be provided to you for the completion of the project.

Make sure to clear all your doubts here, and you may also ask for a prototype building before moving on to the final product.

After you are satisfied with the team of Python developers you have chosen to go with, you may finalize the deal with the company. Note that good and reputed development companies always sign an NDA(Non-disclosure agreement) at the beginning of a deal that protects your project's rights and prevents any theft of information.

Find out the Cost to Build Your Project by Citrusbug Python Programmers!

This blog might have helped you learn the basics of Python you need to know before hiring a Python developer. Now, let us move forward to the next step and provide you with an estimated time and cost to build your project. Hire Python Developers from Citrusbug to get guidance, clear doubts, and determine the real costs to build your project.

Python developers are responsible for developing the code for the backend and frontend of the applications. Therefore, they must have adequate knowledge of the technologies such as frameworks, libraries, etc., used with Python.

Though it is a personal choice, hiring developers from established Python development companies ensures success and a better development regime for your business application.

Here are a few questions that you can ask from the Python developers:

Benefits of Python in DevOps to make your application scalable